After driving my new-to-me van home, the reality of what I was about to undertake set in. My DIY Ford Transit Conversion project was not going to be easy. Where do I even start?

I had never done a van conversion and had no idea where to start. So I took to Google and YouTube.

The amount of information online quickly became overwhelming. I was lost in a rabbit hole of ideas. 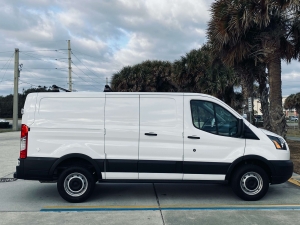 There were so many decisions to make. How big of a battery bank will I need? Should I install a shower in my van? Roof racks? Swivel seats?

I had to focus. It became clear if I were ever going to finish, or start my van conversion, I would have to break it down into manageable steps.

The insulation and floor were the obvious first places to start. Regardless of the layout or comforts I chose, having well-insulated exterior walls, and a solid insulated floor was a must and an obvious first step.

I started by removing the thin black panels from the cargo area’s walls. The nylon rivets that held them in place popped out quickly using a flathead screwdriver. I saved everything with the idea of using the panels later in my build.

Next, I pulled out the large insulated rubber floor and set it aside.

My Ford Transit was now a blank slate of bare steel. It was time to start insulating.

My online research revealed many options—all with pluses and minuses. In the end, I decided to use a variety of insulating options for my van conversion.

Mineral Wool for a Van Conversion

Mineral Wool is made by melting down basalt stone and spinning it into fibers.

I would use mineral wool as the primary insulating material in my project. I chose it for these qualities.

Reflectix for a Van Conversion

As a radiant barrier, I chose to use a product called Reflectix. It’s a two-sided reflective material, sold in rolls. It’s very thin, with a pocket of air in the center. Think shiny bubble wrap.

Again, it was simple to work with and inexpensive. According to the packaging, by combining it with the mineral wool, I could increase the R-value of my insulation install by 30%.

Green Fiber for a Van Conversion

I also used a product called Green Fiber. It’s a cellulose-based insulation typically used in blow-in applications and breaks down into tiny pieces.

Because it is flammable, I used it sparingly to fill the hard to reach areas using gravity. Careful never to use it anywhere that had electrical wiring running through it.

Polystyrene for a Van Conversion

For the floors, the plan was to use polystyrene. It feels like styrofoam with a silver radiant barrier on one side. It’s sold in 4’x8′ sheets, and it’s easy to work with.

Spray Foam for a Van Conversion

Lastly, I used individual cans of Great Stuff Spray Foam to fill all the small nooks and crannies that would have been impossible to reach with any of the other insulating products.

How to Insulate a Ford Transit Van

I began by applying the Reflectix to the exterior walls of the van. I used scissors to cut it roughly to the 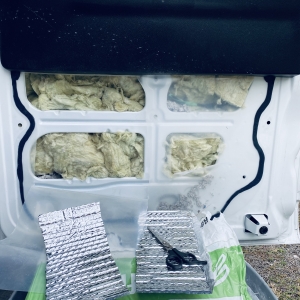 Filling the doors with Mineral Wool

shape of the space. Then I would wedge it in, never needing to use an adhesive.

After that, I would stuff the Green Fiber into the small holes at the walls’ inside base, filling those hard to reach areas.

Next, using a utility knife, I cut the Mineral Wool and stuffed that into the cavities. In some spots, I had to feed it up through the columns by reaching my arms as far as possible.

There was an “itch factor” to the mineral wool, but not nearly as bad as fiberglass insulation.

Also, in some areas, I had room for a second layer of Reflectix. Since it was so inexpensive and easy to work with, I added a second layer that sandwiched the mineral wool between the two radiant barriers. 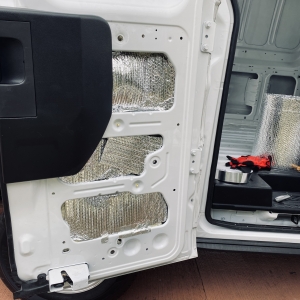 Lastly, using the Great Stuff Liquid Foam insulation, I fed the small straw dispenser into any area I couldn’t reach with the other products and filled it up.

Once a section of the van was insulated, I would then reattach the panels using the same nylon rivets that had held them in place earlier. Easy peasy.

Building a Floor in a Ford Transit Van

Once all the panels were in place, I moved on to the van floor.
The Ford Transit floor was bare metal with raised ridges running the length from front to back.

I decided to cover the raised rails with 1/2 plywood strips, but first, I would insulate between them with 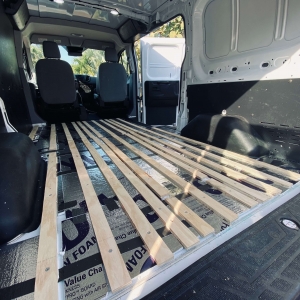 Once insulated, I used 3M 5200 adhesive and 1″ ceramic coated self-taping screws to attach the planks. It worked better than expected.

The next day, I added another layer of polystyrene, then using the floor mat as a template, I traced out the floor onto three sheets of 1/2″ plywood.

I then attached the plywood using Liquid Nails adhesive and 1″ brads. Again, it came out better than expected. My van floor was rock solid.

With the floor complete, again, I focused on the walls. The next step was to frame out the window wells and fill the spaces with Insulation. 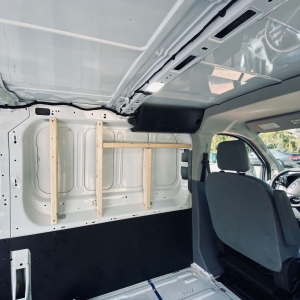 Some of the cuts and angles were difficult to figure out, but it was a lot easier than I had initially anticipated. I repeated the same technique on the doors.

When I finished the framing, I filled all the cavities with insulation and reinstalled the black panels. I then ripped 1/2″ plywood into 3 1/2″ strips and attached them over top of the panels using Liquid Nails adhesive, wood screws, and ceramic self-taping screws. 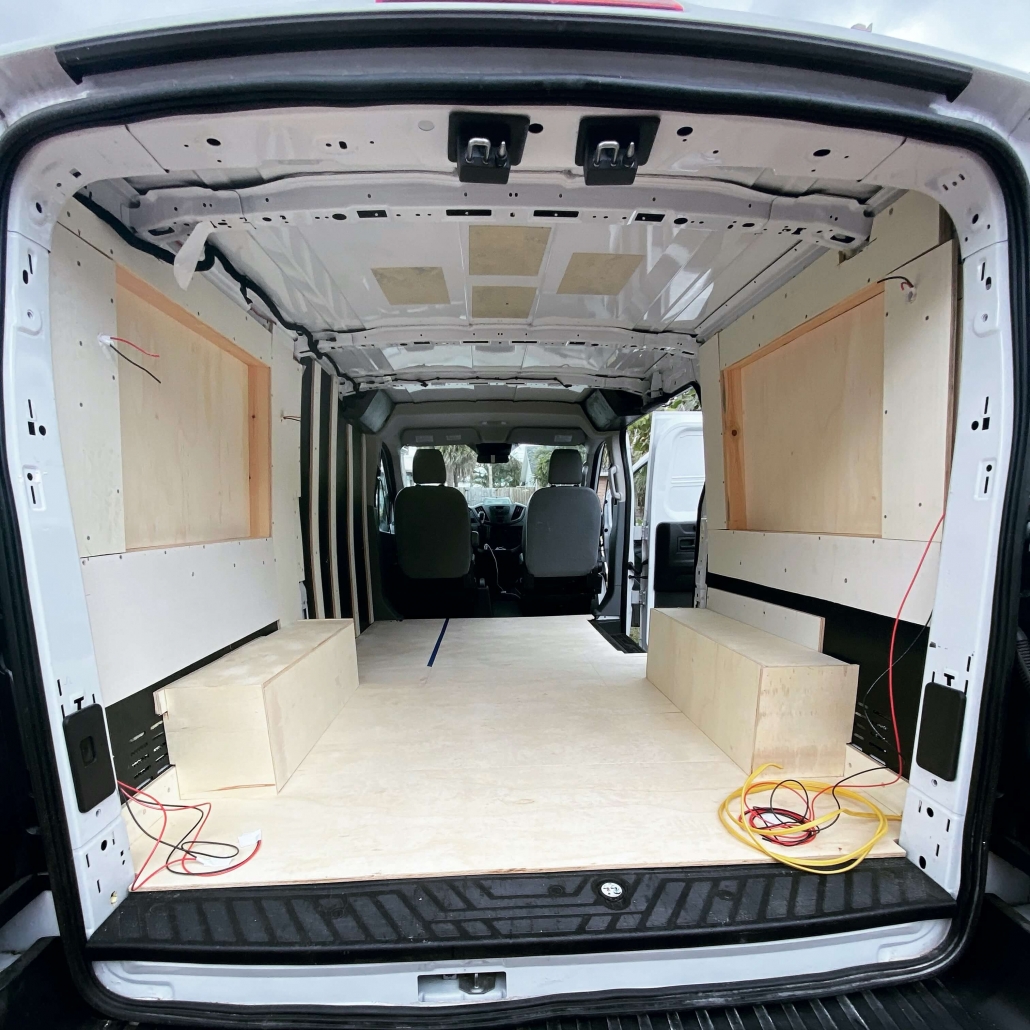 So far so good. Insulation , floor, and walls are complete

My backyard is full of surprises. #fungi #fungilov