It’s funny how one simple idea can change your life forever.

It all started when I decided I needed a vacation. I wanted to travel somewhere new, I wanted it to be adventurous, and keeping with the AgeHigh philosophy, I wanted it to be challenging. For months I stared at Google Maps. Finally, I decided on Southeast Asia. It’s exotic, cheap, and the food is arguably the best in the world. Now all I needed was an activity.

I cannot sit still. The idea of relaxing on a beach with hundreds of other pink bodied tourists horrifies me. The thought of bouncing from town to town and mixing with the backpacking crowd makes me ill. I had to do something physical and off the beaten path. I started researching my usual adventure sports. I looked for Southeast Asia surf destinations and long distance hiking trails. I found nothing interesting.

Then one day it hit me. I could do a bicycle tour! Do people do that? I don’t know. I thought I heard of it and began poking around the internet. Sure enough, turns out bicycle touring is a thing. And the more I learned, the more convinced I was that traveling by bicycle could be the most awesome thing ever. What’s not to love? It involves equipment which is perfect for a gearhead like me, it’s physical, and to say it’s culturally immersive is an understatement. I was all in and I didn’t even have a bike yet. 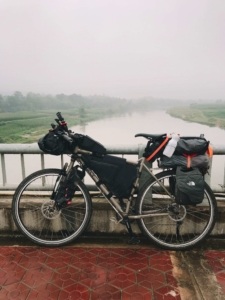 It had been over 20 years since I owned a bike that wasn’t a single speed beach cruiser. When I began looking for a touring bike for my trip, I was instantly overwhelmed. Bikes are still beautifully simple machines, but there have been changes, such as disc brakes, tubeless tires, Rohloff hubs, dynamo hubs, and carbon fiber everything. Where do I start? I took to the forums and determined with the type of bike touring I planned to do; a steel frame bike was the way to go. I narrowed it down to a few models and started searching Craigslist. I found a Surly Ogre for sale and picked it up for a $1,000. In hindsight, it was dumb luck that I ended up with what I now believe to be one of the best touring bikes ever made.

I brought the bicycle home, and before doing anything else, I took her out for a 50-mile ride. Fifty miles was by far the longest distance I had ever pedaled a bike. However, I didn’t find the effort too strenuous. I was already in above average shape. I’m an avid runner with a few ultras under my belt, including a 100-miler.

Now that I had an idea of what I was capable of, I booked my trip. I found a multi-city ticket with Korean Air flying from Melbourne, Florida to Hanoi, Vietnam. The return flight was a month later leaving from Bangkok, Thailand. Given my timeframe, Hanoi to Bangkok seemed like a very doable distance. I looked at a few possible routes between the two cities but decided to leave my options open and play it by ear.

The only real issue I uncovered with my Surly Ogre during my 50-mile ride was the length of the handlebar stem. It seemed long for me at 120mm, so I switched it out for an 80mm Thompson. I also replaced the 2.35″ Schwalbe Big Apple tires for tubeless 2″ Schwalbe Marathon Almotion tires.

Mechanically the bike was ready to go; now I needed to add racks and bags to carry all my precious gear and clothes.

Outfitting the bike turned out to be a much more significant expense then I had anticipated. I decided against the classic bike touring arrangement and went with a more modern bikepacking setup.

Here’s a list of what I finally settled on.

As far as I could tell I was good to go. I didn’t know what I didn’t know, and there wasn’t much I could do about it.

For the next couple of months, I continued my usual running routine and mixed in a few longish rides. When I left, I felt slightly undertrained for cycling, but I was very confident in my ability to suffer. Worst-case scenario I would get in shape along the way.

After arriving in Hanoi, I checked into a room in the Old Quarter for three nights. I would use the time to explore the city, adjust to the time change and put my bike back together after being boxed for the flight to Vietnam. 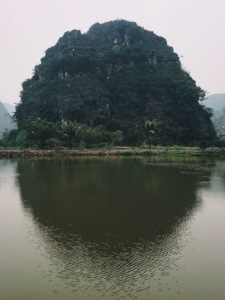 Finally, the day arrived. I was so incredibly nervous. The traffic in Hanoi was intimidating. How the hell was I going to ride a bike through it? I left before sunrise on an early Saturday morning hoping to beat the crowds. It didn’t work. There were bicycles, mopeds, cars, buses, and people moving in every direction. Lights were flashing, and horns were honking. It was sensory overload. But with a little time, I was able to ease into the rhythm. With a bit more time, I began enjoying myself. I ended up covering 61-miles that day and found the most excellent guesthouse in Ninh Binh, Vietnam.

In the evening, as I sat on the porch surrounded by rice patties and giant limestone outcroppings, I reflected on the day. I knew my life had changed forever.

First, let’s get past the question of whether or not I am super fit. Like everyone else, I have good days and bad days, but for the most part, I exercise regularly, I maintain a healthy diet, and I feel great. So, for the sake of this article, let’s all agree that I am super fit.

I’m in Laos. I’m on the other side of the world riding my bicycle. Everyone I know and love is over 8,000 miles away. Most of the time it gives me a thrill to focus on this. Other times, I’m overwhelmed with loneliness.

After completing my first ever bicycle tour, I immediately got home and booked another trip. After five weeks of touring Southeast Asia, I couldn’t wait to get back out there. The plan was to cycle Iceland’s Ring Road, but I wanted to make some upgrades to my bike. Here you will find the specs on the custom bicycle touring wheels I order through ProWheelBuilder.com

It’s that simple and once you understand this a

Nothing to see here. Just your basic whole snapper