My morning started with me drinking a cup of delicious Nescafe instant coffee on the steps of a Thailand 7-Eleven. I patiently sipped as I waited for the sun to rise.

The goal today was Chanthaburi, Thailand. I knew it would be a tough day with a lot of climbing, but I would be closer to Thailand’s Southern Coast. Ever since that dirt road in Northern Cambodia, where I spent the day choking on dust, I had been dreaming of jumping in the ocean.

Finally, I saw the first glimmer of light, and I was off.

As I rode, every few minutes I would encounter an overly aggressive dog or a pack of dogs, and a high-speed chase would start. The dogs weren’t your typical third world terriers. These were big monstrous canines, and I hated them.

The climbing for the day began early. It was slow going, but after nearly three weeks of bicycle touring, I was up for the task.

The morning played out at a snail’s pace.  50-miles was all I covered by early afternoon. Tired, I was doubtful I would make it to Chanthaburi by nightfall and began looking for a hotel. Then the climbing ceased, and I started what would be the longest downhill run of my trip. I covered the final 26-miles to town in just over an hour.

Chanthaburi is a large city but off the tourist circuit. I read somewhere it’s known for being the best place in Thailand to hire an assassin. Lucky for me it also offered some excellent food options. So that evening, I took a pass on the murder-for-hire, but I did eat a large dinner.

When I awoke this morning, I noticed a painful itch in my throat. I immediately thought back to the Cambodian and Thai border. There was a guy a few people ahead of me in line. He had on a surgical mask and occasionally would chug a liquid out of a red prescription bottle. I had to listen to his constant coughing for three hours while waiting. At the time I knew that motherfucker would make me sick. He did.

Sore throat or not, I was determined to swim that morning, so I packed up the bike, once again visited a 7-Eleven, then headed out of town.

The ride to the coast was enjoyable. The route reminded me of my home in Florida. There was mile after mile of mangrove covered wetlands. I could smell the salt air well before reaching the beach.

When I reached the coastline, I found a spot and jumped right in. My long anticipated swim was quick but satisfying. Mission accomplished. I then spent the afternoon riding West along the coastal highway to the small coastal town of Ban Phe.

Yep. I am sick. While I was asleep my sore throat escalated to a full-blown fever. Riding my bicycle was the last thing I wanted to do that day, but I had to keep moving.

The plan was to ride until I found a pharmacy where I could purchase some antibiotics. From there I would check into the first hotel I came across and take a rest day. At least that was the plan.

Around 10:00 am I found my sweet drugs. A pharmacist sold me some amoxicillin. Confident I’d be feeling better in no time; I pushed on.

Despite being in a highly populated region of Thailand, I managed to spend the day touring some very empty backroads. Then late in the afternoon I crested a hill and saw the skyline of Pattaya. It was much larger than I expected.

The antibiotics had kicked in, and I was feeling much better, so I raced towards the city. I found a nice hotel near Pattaya’s Walking Street.

Having no doubt, I was on my way to recovery. I decided to catch a ferry across the Gulf of Thailand to the town of Hua Hin.

Modifying my route would add a couple of days to my bicycle tour. At the time it seemed like a good idea.

I was sick again. My fever was back, and it was worse than ever. It was going to be a long, tough day. 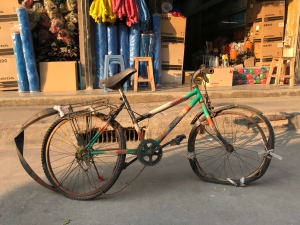 I felt worse than this bike

I took a route towards Bangkok that was off of the main highway. I was feeling horrible, but the backroads offered some of the best touring of my trip. The scenery was spectacular. There were dirt roads that meandered through lush green rice patties and limestone towers. The route was peaceful and empty except for the occasional village.

Late in the afternoon, I arrived at a small town on the Bang Tabun River. It was in the middle of nowhere and the hotel I planned to sleep at no longer existed. My only option was to continue another 20-miles to Samut Songkhram.

When I arrived, It was near nightfall, and I was worn out.

The bike and I were packed and ready to go well before sunrise. Covering way more miles than I had planned on the previous day, now I was only looking at a few hours of riding to reach my final destination. Bangkok.

What should have been a leisurely morning of riding became pure hell. I chose to ride along the interstate. It was the shortest route to the capital. But as I soon found out, it wasn’t the best. 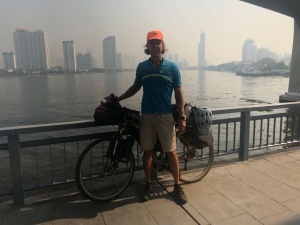 Me, my Surly Ogre, and Bangkok

There was so much trash alongside the road that it created a perfect habit for wild dogs. The dogs wouldn’t leave me alone. They were by far the most aggressive I had encountered. As soon as they saw me, they would perk up their heads, barking and snarling; then they’d give chase. My nerves were frayed.

As I frantically pedaled closer to Bangkok, the air quality rapidly decreased. The pollution burned my eyes as I rode along and the smell was indescribably bad.

The air, the dogs and my sickness were too much. My emotions were out of control, and I had a small breakdown while doing an update for the camera. Profanities flew from my mouth, and I had to reshoot after I calmed down. The second take wasn’t much better.

I finally reached Bangkok, and my bicycle tour of Southeast Asia was complete. In total, I had ridden my bicycle 1,398 Miles across Vietnam, Laos, Cambodia and now Thailand.

Many people I know have referred to my tour as the trip of a lifetime. It wasn’t. I’m just getting started. The journey was the first time I traveled by bicycle, and I am addicted. There’s more to come, so stay tuned.

With that said, I will end my Bicycle Touring SE Asia series with the same line I used to start it.

It’s funny how one simple idea can change your life forever.

I was so incredibly nervous. The traffic in Hanoi was intimidating. How the hell was I going to ride a bike through it? I left before sunrise on an early Saturday morning hoping to beat the crowds. It didn’t work. There were bicycles, mopeds, cars, buses, and people moving in every direction. Lights were flashing, and horns were honking. It was sensory overload.

Not only is this experience called life beyond words, now that I’m turning 50, I’m convinced it’s about to get even better.

Don’t believe me? Pull up a seat, and I’ll explain why.

In preparation for my upcoming tour of Iceland, I wanted to make some touring bicycle upgrades to my Surly Ogre. To start, I wanted power. I wanted a solution for charging electronics while touring. I also needed more storage. Unlike my previous tour of Southeast Asia, I will need to carry a tent, food, fuel, and other camping supplies.