My decision to go bicycle touring in Mexico came about due to my limited travel options as an American. I also had friends living there, and it was easy to get to from my home in Florida.

My first post, Bicycle Touring in Mexico During COVID, ended with hiring a driver to take me back to the East Coast of the Yucatán Peninsula from Merida because of how strict the COVID lockdown was there.

Before I get into details, I’d like to mention that I had contracted COVID a month earlier and had tested negative before leaving, so I was confident I couldn’t spread or get it again. Even so, I exercised every caution. I wore a mask and socially distanced whenever I was in public.

Once back in Playa Del Carmen, I decided to take the ferry to Cozumel and bicycle tour around the island. 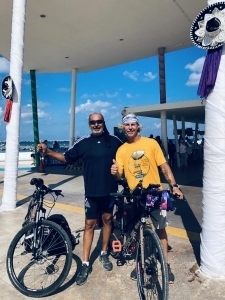 At the ferry dock in Cozumel

I was off to an early start. Even though the ferry was crowded, it was mostly locals. When I arrived in Cozumel, it looked like a ghost town. I later found out; the typically popular tourist destination usually hosts thirty-nine cruise ships a week. Due to COVID, they haven’t had one visit in 5-months.

Shortly after arriving, I started my counter-clockwise circumnavigation of Cozumel, and the small town of tourist shops, bars, and restaurants quickly faded away.

As I rounded the Eastern side of Cozumel, the thick brush gave way to sweeping ocean views. The shoreline was mile after mile of blinding white sand beaches covered with 1,000’s of turtle nests. The water was a brilliant blue with darker patches indicating patches of reef underneath.

I stopped for lunch at an isolated outdoor restaurant on the beach. Afterward, I continued my 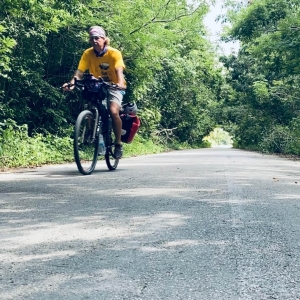 The next morning I took the ferry back to Playa Del Carmen, ending my time in Cozumel.

If you ever get the opportunity, I highly recommend cycling in Cozumel. It was such a peaceful and enjoyable ride—especially on the uninhabited side of the island.

Using Playa Del Carmen as a home base, I regrouped and decided to cycle North to Holbox. The most direct route had a section that required you to ride along a toll road. I asked some locals if I’d be able to ride a bicycle on it, and I got a unanimous yes. So I went for it.

With another early start, I began the 85-mile ride to Holbox. About an hour and a half into the day’s bicycle touring, I came to the 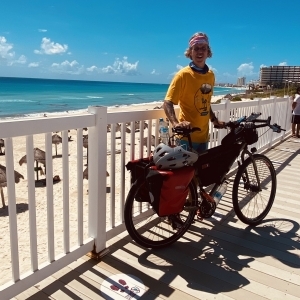 Bicycle touring along the beach in Cancun

tollbooth. The attendant was very apologetic, but he explained there had been too many accidents and bicycles were no longer allowed on the road. I had to turn around and backtrack.

By the time I got back to the alternative route, I had been cycling for 3-hours and had made virtually no forward progress. I changed my plans and proceeded to ride to Cancun.

I arrived in Cancun about 6-hours later. The beach was stunning—pure white sand and some of the clearest aquamarine water I had ever seen.

I ended up renting a room out of the tourist area in the central part of the city.

The next day, I loaded myself and my Surley Ogre onto a ferry to Isla Mujeres.

The day was gorgeous, and once I arrived, I started a clockwise bicycle tour around Isla Mujeres.

Isla Mujeres is tiny. Even though I was riding at a painfully slow pace, stopping to admire every view, it still only took a couple of hours to cycle around the entire island.

That night I stayed in the main part of town and spent the evening exploring the narrow streets and alleyways.

The next morning, I ferried back to the mainland and started my ride back to Playa Del Carmen.

The two-lane road to Chichen Itza was extremely overgrown. The jungle had completely taken over the shoulder. Every time I heard a car or truck approaching from behind, I had to pull off to the side of the road and let them pass.

The heat was also a major issue. Mid-day, I had to pull to the side and sit under a tree. Again, I was suffering from heat exhaustion.

I was eventually able to continue but decided to stop for the night in the colonial city of Valladolid.

I am in the beautiful city of Copacabana, Bolivia