In August of 2020, I decided to go bicycle touring in Mexico during COVID. More specifically, the Yucatán Peninsula.

Before I get into details, I’d like to mention that I had contracted COVID a month earlier and had tested negative before leaving, so I was confident I couldn’t spread or get it again. Even so, I exercised every caution. I wore a mask and socially distanced whenever I was in public.

My Mexico bicycle tour began with a flight from Miami to Cancun. From there, I hired a van to drive myself and my gear an hour 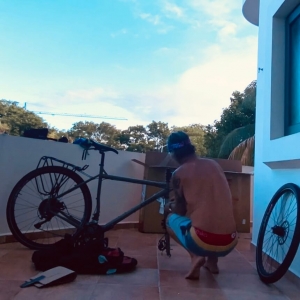 Putting my bicycle together in Playa Del Carmen

South to the vibrant coastal town of Playa Del Carmen.

While staying with friends, I spent the next few days putting together my bicycle and planning my itinerary.

While Playa Del Carmen was on a limited lockdown due to COVID, it wasn’t easy finding information on the other towns and cities. So using Booking.com, I checked hotel room availability along my tentative route.

There were available lodging options everywhere I checked. It seemed most of the Yucatán Peninsula was also fairly open. Confident I would be able to find places to stay and eat, I was off.

The first day started with a 45-mile ride south on a relatively busy four-lane highway. There was, however, a large shoulder perfect for bicycle traffic.

The only problem I had was the heat. Being the beginning of August, it was insanely hot and humid. By the time I reached Tulum, I was suffering from mild heatstroke. I spent the first hour after arriving, sipping chilled fruit smoothies, attempting to recover.

Tulum was just as open as Playa Del Carmen. Finding a room for the night was easy. I checked in, cranked up the AC, and took a long, much needed afternoon nap.

Later, I spent a lovely evening walking around the busy main drag watching the other tourists and the locals go about their daily lives.

The next morning I headed inland. My goal was to visit the iconic Mayan ruins of Chichen Itza. Since it would have been a 90-mile ride, and I was still acclimating to the heat, I decided to break it up by stopping in the town of Coba.

Once I arrived in Coba, I realized things were very different. Almost nothing was open. There were no other tourists. Unlike Playa Del Carmen and Tulum, Coba looked like a ghost town.

I was able to find a hotel, and the next morning I was off to Piste. The gateway town to Chichen Itza. 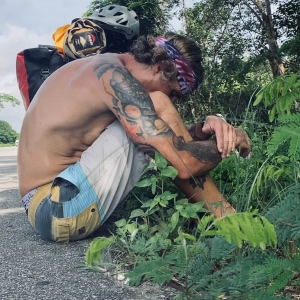 Coping with the heat on the road to Chichen Itza

The two-lane road to Chichen Itza was extremely overgrown. The jungle had completely taken over the shoulder. Every time I heard a car or truck approaching from behind, I had to pull off to the side of the road and let them pass.

Again, the heat was an issue. Mid-day, I had to pull to the side and sit under a tree. Again, I was suffering from heat exhaustion.

I was eventually able to continue but decided to stop for the night in the colonial city of Valladolid.

I rented a room in a beautiful luxury hotel on the main square directly across from the Cathedral of Our Lady of the Holy Assumption. Typically a $300 plus room, now rented for $30.

The next morning, I started my day of bicycle touring before sunrise to beat the heat. It worked. The day’s ride went much better. I was becoming accustomed to the heat. But I had a bigger problem.

I arrived in Chichen Itza only to discover it was closed. Disappointed, I continued to the town of Piste to find a place to stay for the night.

I had checked for rooms online the night before, and there were plenty of options, but to my surprise, everything was closed. Hotels that I could have booked online when seen in person had obviously been closed for months. Most were completely rundown 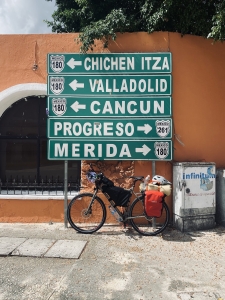 and being overtaken by the jungle.

I had a tent, but the number of snakes and tarantulas I passed every day while cycling made the idea of sleeping in the jungle very unappealing. My only option was to continue riding West to the city of Merida, about 75-miles away. Not wanting to accept that reality, I desperately began asking around.

Eventually, after a couple of hours, I was able to find a place to stay. The family that ran the hotel told me I was the first guest since the COVID lockdown started 5-months earlier.

It was strange. Chichen Itza typically receives over 3-million visitors a year. Yet, due to COVID, I was now the only tourist in Piste.

I awoke the next day well before sunrise and began cycling the 75-miles towards Merida. It was a fantastic day of bicycle touring. The scenery changed from dense jungle to rolling hills, farmland, and quaint little towns.

It was hot, but I was now used to the heat. I was able to cover the distance in just over 7-hours.

I checked into a nice hotel in the city center and headed out to explore. Unfortunately, everything was closed. Merida was in full COVID lockdown. Food was takeout only, alcohol sales were forbidden, and mask police patrolled the streets.

After asking around, I discovered somewhere between Coba and Valladolid; I had crossed from the state of Quintana Roo to Yucatán. That was the reason for the drastic difference in COVID policy.

The next day, I decided to hire a car to drive me and my gear back to the Eastern Coast of the Yucatán. Back to the state of Quintana Roo. It was a tough decision to make, but the bicycle touring was so much more enjoyable on the Eastern side of the Penninsula, and there was still plenty more to explore there.

I am in the beautiful city of Copacabana, Bolivia