After being uninspired by the surf in Oualidida, I decided to continue my bicycle tour of Morocco by heading South along the coast to the bustling town of Safi.

When leaving Oualidida, the climb back to the main road of RR301 was quite an effort, but once complete, I was rewarded with stunning views of the Moroccan coastline.

The surf was massive. I’d estimate my distance to be around 4 miles from the shoreline. Even at that distance, I could hear the heavy crashing of the waves as they slammed into the jagged shore.

The weather was perfect, and the view was breathtaking. As I cycled, I couldn’t help thinking how this was hands down one of the best days of bicycle touring I had ever done. It was one of those moments where I was convinced that I was one of the luckiest people to be alive. This was the moment I had been searching for.

As I rounded the main point in El Beddouza, the road curved heading me in a more South-Eastern direction. 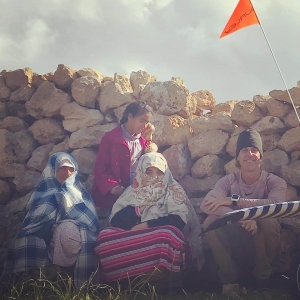 The distance between RR301 and the Atlantic Ocean also closed. I was now riding my bicycle on top of a huge cliffside overlooking numerous pointbreaks. It was awesome!

As I approached Safi, I spotted what looked like an incredible, peaky beach break. There were surfers out, but because I had not been able to find fuel for my stove, I had no option other than to continue. It was heartbreaking. I would have loved to have camped on the beach that night, but I just wasn’t prepared to cold camp. No morning coffee? No thank-you!

I finally reached Safi in the early evening and was able to find a hotel on the cliffs above the town’s premier surf break.

Hoping my surfing luck would change in the morning, I settled in, ate, and got a good night’s sleep.

When I woke, I quickly dressed and hiked down the dirt road to check the waves. It was flat. Disappointed, I decided to move a few miles into the city, get another room, and try to find fuel for my stove and some other supplies.

I spent the better part of the day searching for a canister of propane. Again, like in Casablanca, I struck out.

Before flying to Morocco, I had researched and read that fuel canisters were readily available. That couldn’t have been more wrong. I was frustrated. My dream of waking up in my tent on a deserted beach seemed to be slipping away.

After about an hour, I was able to make it back to the coastal road. Immediately, I started to climb. It was an extreme struggle to move forward. A true mental exercise. The added weight of my Burley Coho trailer made it tough going. I moved at a snail’s pace. The Moroccan coast was beautiful, but it did little to distract me from pain. It was going to be a long day.

Finally, many obscenities and a few tears, I reached the walled city of Essaouira.

The day was filled with climb after climb. I was beat. However, I quickly caught a second wind as I entered the ancient fishing port.

The place was incredible. The narrow alleys and walkways were like nothing I had ever seen before. There were so many random twists and turns. I instantly became lost in the maze.

A local woman offered to help me find a place to stay. I followed her through the tight cobble stone streets, pushing my bicycle. I was inspired. I couldn’t wait to ditch my bike and explore this wondrous place on foot.

After about 10 minutes, we arrived at a large wooden door. There were no signs, but my guide confidently rang the bell. An older woman yelled down from the rooftop. After exchanging words in Arabic, the woman disappeared and shortly after opened the door and welcomed us in.

It was a Moroccan Riad. There was a large square open-aired courtyard surrounded by numerous rooms rising about five stories to the roof.

I checked in. I showered, and I was off to explore.

That first night in Essaouira was fantastic. Even though there were no surfable waves, I decided to stay another night. It’s definitely on my list of must see places.

After a couple of days of city life, I decided to head South to the small outpost of Sidi Kaouki. Even without a stove, I was desperate to camp. It was only about 20 miles down a dirt road. Not only was it close, but it also had the potential 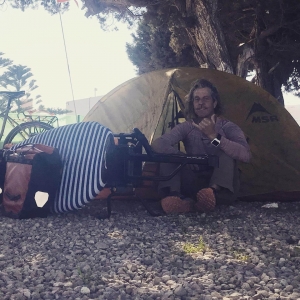 When I arrived in the early afternoon, things looked promising. The wind was on the waves, but hoping thenext morning would bring calmer surfing conditions, I set up camp.

Before sundown, an older gentleman approached my campsite with a tray full of “special” cookies. I purchased one of his edibles, then I managed to score some black market beers from a local artist, and enjoyed a spectacular sunset on the empty beach across from my campground.

Bicycle Touring Morocco – Sidi Kaouki to the Middle of Nowhere

At some point in the middle of the night, the wind picked up, and unfortunately, it kept howling through the night into the morning. Surfing was not an option. It looks like it’s going to be another day of bicycle touring in Morocco. It could be worse.

My research for this Moroccan bicycle tour, like most, was minimal. So, with a quick check of the coastline using Google maps, I found a spot that looked very promising for some quality surf. I had never heard of Imsouane Bay, but the satellite images revealed a long peeling right pointbreak.

After breaking down my campsite in Sidi Kaouki, I packed my gear up and headed down the coastal dirt road towards the fishing village of Imsouane. Again, the view was stunning as the road weaved along the coast.

The plan was to do an easy 45-mile day. Check into a hostel and spend a few days surfing. Plans changed.

The condition of the road was atrocious—mile after mile of bone-jarring washboard conditions. A few hours in, it became obvious I wasn’t going to make my planned destination.

By late afternoon, I was also in the middle of nowhere: no people, no homes, no stores. The only other life I came across on that sweltering afternoon where a couple of camels blocking my path. Not sure how to deal with camels, I took a deep breath and pushed forward.

I was sweating and covered in dust. I started to accept that I was going to be sleeping in the Moroccan backcountry with no fuel. I chugged one of my remaining beers and decided to push forward as long as I had light. Morale was low.

Then everything changed. I saw a sign for a hotel pointing down an unassuming dirt road. I did not have high hopes but decided to check it out anyway.

For the life of me, I can’t remember the name, and I can’t find it on a map, but in the middle of nowhere, I stumbled across a gorgeous resort hotel.

I was desperate for a bed, a shower, but mostly a hot meal. I told myself, if rooms are less than $100 a night, I would be staying there.

It turns out, rooms were $60, and to say the rooms were nice is an understatement. They were beautifully decorated, with hot water and a balcony overlooking the ocean. There was also a restaurant on site.

I couldn’t believe my luck. My situation had changed from one of pure misery to absolute comfort within minutes.

The climb out of the small surf town was brutal. It took well over an hour and was easily the steepest of my life. Towing a trailer and surfboard didn’t help.

Words cannot describe the view at the top of the ridge. Seeing the peeling lines from that altitude is easily a top-five highlight of my bicycle touring career. A full-on, this is why I do this moment.