To celebrate turning 50, I bought a plane ticket to Morocco with the intention of doing my own dream bicycle tour. Along with my Surly Ogre touring bicycle, I also brought my surfboard and a Burley Coho trailer to haul it with. With this setup, I could be self-sufficient for days.

My Moroccan adventure started in Casablanca. After a couple of days of putting my bike together and gathering last-minute supplies, I was off with my surfboard in tow dreaming of surfing the endless Moroccan pointbreaks, and touring empty coastal roads.

To beat the morning traffic out of the city, I left predawn with the morning call to prayer blasting from Casablanca’s many Mosques.

I spotted what looked like a left pointbreak down the coast and decided to abandon my planned route to get a closer look.

My detour brought me to the coastal town of Dar Bouazza. It was the most relaxed little surf town. After exploring a bit, I found a nice left on the Northern tip of the city. I was tempted, but the lineup was empty, entry looked sketchy, and I was apprehensive about leaving my bike and gear unattended. I continued around the point and discovered a stretch of beach break.

There were multiple peaks. There were surfers on the peaks. I desperately wanted to paddle out, but again, there was nowhere to park my bicycle. I looked around for someone to watch my touring gear, but it was too early, and none of the businesses were open. Defeated, I continued to cycle South.

Around noon on that first day, I started to get hungry. As I rode, I noticed restaurant after restaurant heating clay pots over 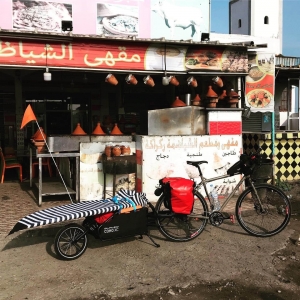 Stopped for my first Moroccan tagine

charcoal. I randomly picked one and, using sign language, ordered my first tagine.

I had no idea what to expect as I lifted the lid. It was a delicious blend of what I’m assuming was beef, along with carrots and a potato-like vegetable. I was hooked.

After lunch, I continued my Moroccan bicycle touring surfari and continued South towards the coastal city of El Jadida.

With all my detours, I managed to cycle 80 miles that first day out. As the sun was setting, I checked into a hotel and collapsed from exhaustion.

I woke up early to the call to prayer blasting through a loudspeaker. It sounded so foreign and intimidating to my ears. I was thrilled.

The sun rose as I continued bicycling South past a staggering backdrop. I rode through miles of coastal farmland, watching the busy locals pick beets, carrots, cabbage, and cauliflower. They used donkeys to haul their harvest from the fields. The Muslim women were covered head to toe. Some wore scarfs revealing only their faces. Most wore burkas covering everything but their eyes. The men dressed in long robes. They looked like medieval wizards.

According to the surf forecast, there was a massive 18′ swell coming. The plan was to ride 49 miles that day to the coastal town of Oualidia. It is known for a “surf school” wave that I hoped would be going off with such a large swell.

I arrived in the early afternoon and checked into a room. When I woke up the next morning, I hiked up and down the jagged coastline looking for a surfable wave.

The “surf school” break didn’t look very compelling. The outside was huge, but there were no surfers out, and there was no clear water entry along the miles of cliffs. No surf today, no problem. I was bicycle touring in Morocco. Things couldn’t have been better.

It was still dark, but I was racing through the city to make it to Angkor Wat before sunrise. I arrived with only minutes to spare, and it was brilliant. I then spent the rest of the day riding from temple to temple. There were busloads of tourists, but since I was on a bicycle, I easily avoided the crowds. My day in Angkor Wat was hands down the highlight of my time in Cambodia.

It was cold, freezing cold. I had obviously done a lousy job at packing the right clothes for bicycle touring Turkey. Thankfully, I decided to throw in a pair of gloves at the last minute.

I rode on thru the morning. Slowly the buildings peeled away, and the countryside began to creep in. Finally, I was on the coast. With the Sea of Marmara on my left and a patchwork of fields on my right, the cycling was beautiful. It was precisely what I had signed up for.