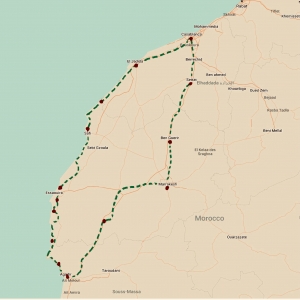 Once I discovered my love for bicycle touring, Morocco shot to the top of the list of dream touring destinations, but there was one problem. I’ve always wanted to surf in Morocco too. I had to find a way to combine my two traveling passions, bicycle touring, and surfing.

I thought about it for months. Maybe I could rent boards along the way? Perhaps I could mount my surfboard on the side of my bike? Then it hit me, a trailer.

I had seen other people bicycle tour while towing a trailer. The plan was to do the same and mount my surfboard on top. I started researching.

In the end, I settled on the Burley Coho XC. It was well-reviewed, it had a quick-release system for attaching to the bicycle, and most importantly, a flat surface to mount my board on.

I decided on a route that would lead me South along the Atlantic Coast from Casablanca to Agadir. I would have multiple surfing opportunities along the 400-miles of coastline while also passing through some of Morocco’s premier surf breaks. Such as Imsouane Bay, Safi, and Morocco‘s most famous wave Anchor Point.

From Agadir, I would turn inland and cross the Atlas Mountains to the magical city of Marrakech.

From there, I would head back to Casablanca, completing the 840-mile loop.

Of course, I would stop and explore the many small towns and villages that I would pass through along the way. Essaouira, El Jadida, Sidi Kaouki, and Taghazout were all on that list.

So on New Year’s Eve 2019, I boarded a plane in Miami, Florida and the trip of a lifetime was officially underway.

I had high hopes for Morocco, and in the end, I was not disappointed. The trip was way beyond anything I could have ever imagined. The landscape was stunning. Every city and town was overflowing with charm. The food, culture, and people were amazing.

After thirty-plus years of traveling internationally, I can honestly say Morocco is one of my favorite places I ever visited.

I know I barely scratched the surface on my trip. I left leaving so much left to explore. I will be returning to Morocco soon. I fell in love with the country.

Below you will find blog posts detailing my Moroccan journey. Each post had a link to a video capturing each day’s highlights.

I hope you enjoy the posts and videos and please don’t hesitate to comment or ask any questions about my touring in Morocco.

The climb out of the small surf town was brutal. It took well over an hour and was easily the steepest of my life. Towing a trailer and surfboard didn’t help.

Words cannot describe the view at the top of the ridge. Seeing the peeling lines from that altitude is easily a top-five highlight of my bicycle touring career. A full-on, this is why I do this moment.

When I reached the ridgeline, the wind was howling. In total, it took me over 14-hours of cycling to get there from the coast. I was in bad shape and completely underestimated how difficult the climb would be. Despite my condition, I had to push forward. I still had 90-miles to go, but luckily, it would be mostly downhill.

As I coasted down the mountain, the temperature steadily increased. After many hours, my body was finally warming up. The sky cleared; moreover, once again, I was enjoying my bicycle tour immensely.

I decided to take a break from my Morocco bicycle tour and run a marathon in the exotic city of Marrakech. To get to Marrakech from the coast, I had to cycle 190 miles from the small surf town of Taghazout, traversing the incredible Atlas Mountain range. Unfortunately, I drastically underestimated the amount of recovery time I would need after that ride.